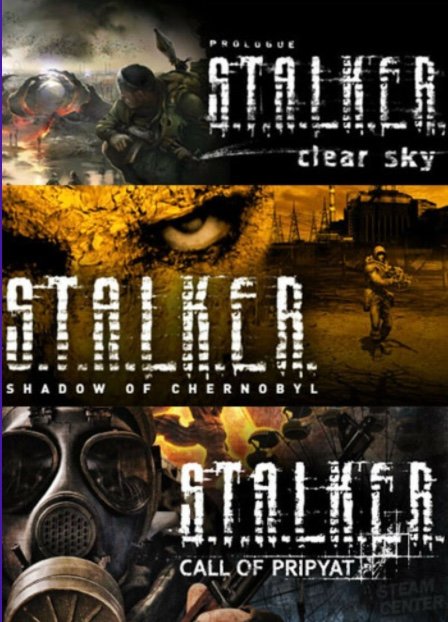 Ukrainian gaming studio presents a release conveniently containing several S.T.A.L.K.E.R. titles in one place - S.T.A.L.K.E.R.: Bundle GOG key. Enter the ominous area surrounding the infamous Chernobyl, known as Zona. The survival FPS gameplay enriched with horror elements invites players to test their mental capabilities and shooter skills in a game that spares no one. S.T.A.L.K.E.R.: Bundle key creates an alternative reality where things after the Chernobyl disaster took a much darker turn, giving birth to greater anomalies than humankind could imagine.

Three games in one

S.T.A.L.K.E.R.: Bundle key contains three games of the series: S.T.A.L.K.E.R.: Clear Sky, S.T.A.L.K.E.R.: Call of Pripyat, and S.T.A.L.K.E.R.: Shadow of Chernobyl. All three titles contribute to the S.T.A.L.K.E.R. franchise, the first in chronological order being Shadow of Chernobyl – twenty years have passed since the Chernobyl disaster, causing repulsive mutations and infecting surrounding areas with deadly levels of radiation. In 2012, it’s finally safe enough to investigate the Zona in search of mysterious artefacts that might cost a fortune. The other two games continue to elaborate on the precarious investigations, recklessly nearing the center of the Zona. Will you survive the hazardous anomalies lurking in the radioactive area? Buy S.T.A.L.K.E.R.: Bundle GOG key and test your ability to adapt, survive and battle with creatures no man has ever imagined to see!

S.T.A.L.K.E.R.: franchise can pride itself on achieving an intense gaming experience by developing engaging gameplay mechanics, surpassing many FPS titles in the survival genre. Played from the first-person perspective, the title seamlessly combines elements of survival, horror and FPS to bring out a rich gameplay that is not limited to merely shooting. A player must search the areas, react quickly to take down mutated creatures, enemies and carry out missions. Once you meet other Stalkers, you must quickly estimate them and make a choice – take them down or cooperate with them. Nothing is as it seems, so be prepared to trust no one, feel the breath of death on your back at all times and experience a challenging yet rewarding combat with S.T.A.L.K.E.R.: Bundle key!